The Value of Virtualization

[This article was originally published by Deseret news (http://www.deseretnews.com/article/865580992/The-value-of-virtualization.html)] 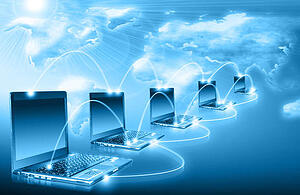 Virtualization allows businesses to consolidate hardware and physical servers while eliminating the need to buy numerous pieces of equipment to achieve their needs.

Virtualization Explained
Virtualization, creating a virtual version of something, allows businesses to consolidate hardware and physical servers while eliminating the need to buy numerous pieces of equipment to achieve their needs. It also enables users to run a more efficient system.

In my opinion, there is a place for virtualization in every organization. Five or six years ago, I wouldn’t have said that, due to the high cost associated with the technology. But it's not too expensive anymore.

Technology is developing so rapidly that the old way of tying an application to hardware is changing. Virtualization enables a business to have enterprise-class infrastructure at a reasonable cost.

There are two main advantages of virtualization: consolidation of hardware and increased reliability.

• Reliability: In the past, if one of these 10 servers failed, the application was unavailable until the hardware was replaced. With virtualization, if one of the two physical servers fails, the application is automatically restarted on the other physical server. One of the main advantages of virtualization is that we can craft a highly redundant system that is more efficient than what we’re accustomed to. Within minutes of a failure, you can be up and running again, without replacing the failed hardware.

One thing to keep in mind is that with virtualization you’re adding a higher level of complexity. For a small business that has an employee that enjoys IT but doesn’t focus on IT as their full-time job, virtualization may be a little too complicated for them to handle. In my experience, to be fully virtual, a business needs a dedicated and trained full-time IT professional or an IT consultant.
Technology evolves quickly and is constantly changing. You should always ask and determine what the long-term ramifications of a technology are. Based on my research and experience, I don’t see any signs of the move toward virtualization slowing down. As I indicated in a previous article about cloud computing on DeseretNews.com, the cloud is great and provides a lot of wonderful benefits — but in reality, the cloud is built on virtualization. I’m convinced that virtualization will evolve, because all technology evolves. I believe future advancements and innovation will revolve around and be built upon virtualization as we know it today. If people resist the cloud and virtualization, I believe they’ll fall further and further behind and have more difficulties and more expense to catch up on in the future.
Josh Linton
Josh Linton is the vice president of technology at VLCM, which is celebrating its 30-year anniversary in 2013. He manages the company’s technical team that provides tech support and services to its clients. Linton graduated from BYU.